Your Garden is Vitally Important to Bees

Posted on June 22, 2020 By sustainableskerries

Our response varies: some of us actively try and help out, others hope and trust that someone else will do so, others again believe that they can’t make a difference, and there are those that neither know or care.

I would like to see far more people in the former category and less in the last, which is why I write this stuff.

But why are bees in decline?  For that matter why are all pollinators and associated insects in decline?  Some say that the causes are complicated and hard to understand; I say that is complete nonsense; we only have to open our eyes and ears and see the obvious.

Try these explanations for size:

Let’s take them one at a time, starting with insecticides.

We can’t really drive around the countryside and see what is going on in this regard but we do know that far too many are being used far too indiscriminately with disastrous consequences.  Spraying against a fruit moth to produce perfect unblemished peaches is a great short term solution for French fruit farmers and the fussily demanding buying public because it kills fruit moths.  Surprise, surprise, it also kills everything else.  The EU tries to get the worst of the sprays banned; the big chemical companies such as Bayer fight back to protect their very considerable short term profits.  And they have the money to do so.

Meanwhile French farmers, eager to keep producing an expensive high end product, nip across the border to Spain where restrictions are more lax and import the same banned chemicals on their own behalf.

Irish farmers don’t grow peaches, so no problem there, but you’d probably rather not know what or how many sprays go onto our tomatoes and strawberries.

So that’s insecticides out of the way, surely herbicides aren’t a problem here?

Unfortunately they are.  Weedkiller might be intended to kill weeds but at the end of the day it’s very toxic stuff.  If grassland is sprayed and bees happen to be foraging on flowers there at the time they will ingest it and die.  Beekeepers have been known to lose whole hives this way.  Even where good neighbour arrangements exist and a beekeeper is warned to either move his hives or keep them shut up for the day this is of no use to wild populations of bees which are going to die either way.

Habitat loss and starvation are pretty much the same thing.  Here’s a photo taken at the back of Skerries a couple of weeks ago.

It shows acres and acres of monoculture with not a flower in sight.  Worse, the entrance to the field has been spayed to kill all wildlife.

Ironically, not quite visible in the photo is a notice proclaiming this to be a game sanctuary!!

Whoever did this is not alone, here’s another example a few miles away:

I cannot for the life of me understand the mindset of someone who does this.  What’s the point?  Fortunately not all farmers do this of course, but there are far too many who do.

It is now being realised that much of modern agricultural practice is not sustainable in the long term.  It seems to have served us well enough up to now by putting cheap food on the table (too cheap in a way, worldwide we throw 40% of it away) but things have to change.  Someone (can’t remember who) speaking on the subject recently said “agriculture is a big ship, and big ships take a long time to turn”.

Until that ship is turned bees have one last refuge in which to survive: your front or back garden.

Compare and contrast the pictures above with these, both from Skerries: 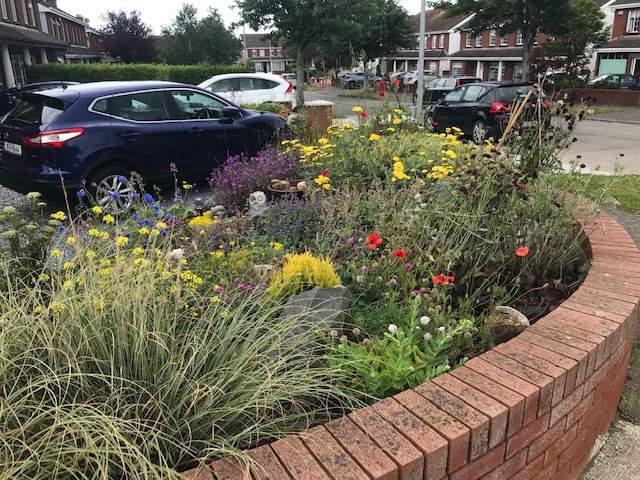 Both are alive with bees.

I have no idea who tends the garden in the top pic, but do know that the owner responsible for the garden below selected pollinator friendly plants and wouldn’t dream of using sprays.

I don’t see the necessity of using herbicides at all in our gardens. hoeing, mulching or digging is all that’s needed in the beds, and if you have problems with weeds growing between paving stones a quick application of malt vinegar does the job.

Bees, in my experience, are very largely misunderstood.  Which is a pity.

Bees can sting, so everyone assumes they will.  Unless threatened they will not.  A dog can bite, a cat scratch, and a Dublin bus flatten you to a pulp but no-one runs around in a panic shouting and waving their arms about whenever they see one.  Bumblebees are by far the most docile of the four.

Are bumblebee stings more painful than honeybee’s?  I don’t know.  Despite all the messing about observing, peering at and brushing past bees that we do, my wife and I have yet to be stung.  (Our friend Eugene was recently stung twice by Bombus muscorum when he accidentally disturbed their nest.  He said it was no worse than being stung by a stinging nettle.  I’ll take his word for it).

We have 21 different species of bumblebee in Ireland.  It was 20 until a couple of years ago when the European Tree Bee, having some time previously crossed the English Channel, managed to traverse the Irish Sea and arrive on our East Coast.  The first sighting was in Dublin, the second in Belfast.  Makes you wonder if they took the ferry.

Some species are doing considerably better than others; some are in serious trouble.  So couldn’t we afford to lose a few?

The answer is no.  Different species have evolved to fit different environmental niches.  Eugene’s B. muscorum, or Large Carder Bee feeds predominately on vetches, Kidney Vetch in particular.  The bee needs the vetch and the vetch needs the bee.  It is also worth noting that of the seven bumblebee species we have so far identified in Skerries this is the rarest, being currently classified as near threatened conservation status.  In fact Skerries appears to be something of a stronghold for them.  Well worth protecting.

For those who haven’t seen it before, here’s a pic.  South Strand this time last year.

The Garden Bumblebee, Bombus hortorum, is also found here although it is not as common as might be expected.

This bee is a specialist feeder that has developed an enormously long tongue which can reach deep into flowers other bees cannot reach.  In fact it can be nearly half as long as her head and body combined.  When not in use she rolls it up and stores it in her purpose-built elongated head.

This, believe it or not, is a bumblebee related picture, but what’s going on here?  Both strawberries from the same plant by the way.

The answer is that bumblebees are the best ever pollinators of strawberries, far better than honeybees or anything else.

The strawberry is actually a compound fruit: all those pips represent individual fruitlets. If they are not all pollinated fairly evenly the result is the specimen on the left; if the job’s done properly we get the one on the right.

Bumblebees have developed a technique called ‘buzz pollination’: they hover over the flower vibrating their wings at exactly the right frequency to blow up a cloud of pollen.  Some of it coats the bee’s fur from where she can comb it out and store it in her pollen baskets, which suits the bee; the rest evenly pollinates the flower, which suits the strawberry plant.  It also suits us.

So if you want perfect strawberries get yourself a bumblebee.

I hope in this post that I have not given the impression that all farmers are irresponsible destroyers of the environment; that was not my intention.  There are good and bad in all walks of life and there are a lot of conscientious and responsible farmers out there.

The problem is that  in many cases they have been and still are encouraged to, indeed driven to, work the land in an ultimately unsustainable fashion.  This as a result of both consumer demand (us) and Governmental policy (EU farm subsidy system), not to mention pressure from agrichemical companies intent on profit maximisation.

I do not retract or mitigate my contempt for those who wantonly spray round gateways or anywhere else that is not crops.

I DO hope that I might have convinced a few people that bumblebees are not nasty little stinging insects to be avoided and feared,  Get to know them folks, you’ll be surprised.

7 Comments on “Your Garden is Vitally Important to Bees”