December 2018 in the Allotments

Posted on December 12, 2018 By sustainableskerries

Sustainable Skerries are delighted to introduce a new regular feature on our website, “The Skerries Allotment Blog” from Charlie Heasman. We hope to publish this blog monthly, or more if there’s more to say!. Enjoy the read, and please comment, positively, constructively and in good humour.

“First, a few words of introduction, my name is Charlie Heasman. My wife, Marion, and myself have an allotment in Skerries, an allotment which over time we have become passionate about.  When Sustainable Skerries heard that not only can I string a half intelligible sentence together when pushed, but also have Microsoft spell check, they invited me to write a monthly blog.  Okay, here goes.

So here we are in December, a time when very little is growing and not a lot is happening, which would seem a mildly surprising time to start. But actually this is not the case.

It’s difficult to think of any enterprise where a bit of forward planning does not go amiss and there is no better example than an allotment.  Here at the tail end of 2018 we have time to plan ahead for 2019, and the better we plan now the better our chances of getting it right then.  Hopefully!

Marion and myself will have been in Skerries allotments four years this coming March.  We had the advantage of not starting off as complete beginners and I will flatter us both by saying that we’ve added considerably more to our knowledge since then.  My intention here is to humbly offer to share what we know with others who may find it of benefit.

Of course, there are some who have been there far longer than us and indubitably know far more than us and I’m sure that collectively they’ll be able to disagree with just about every point I make.  That’s fine, dialogue is good; there’s a comment box below folks, use it. Let’s get a discussion going.

In the meantime I’m the blogger, I get first say..

…and I say we’ve only been here four years and in that time we’ve seen so many people come, give up, and go. 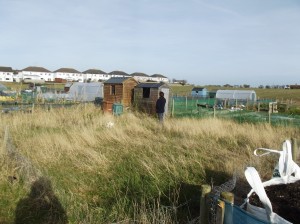 The short answer, always given, is that they didn’t know how much time and work it would be.  This is true in so far as it goes but, let’s face it, if someone’s looking for both a hobby and a release then tending a mere 50 square meters of land should be a pleasure, not a problem.  What is a problem is turning up in April with a trowel and a packet of seeds, scratching with the former and throwing about the latter, and expecting a miraculous crop of vegetables.  It’s never, ever, going to happen.

Why?  Answer: no planning, no groundwork.

Before even thinking about planting (and we’re all impatient for results, we wouldn’t be human if we weren’t) it is necessary to look after the soil.  Get the soil right and the rest will follow; you’d be amazed how true this is.  You’ll also be amazed how much easier life becomes and how much more successful you are. 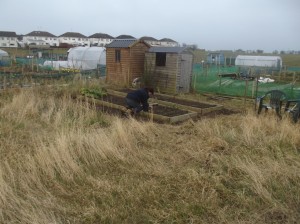 don’t, the ones that remain will come straight back in.  I’m talking perennial weeds here like couch grass, nettles and buttercups.  When we took over our 100 sq m plot it was wall to wall couch grass.  We resolved to start digging in one corner and work our way out.. 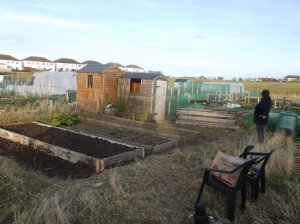 There was a certain amount of backache involved… 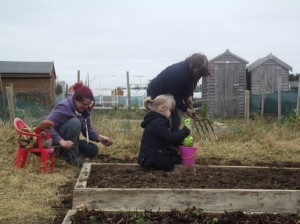 But fun for all the family nonetheless… 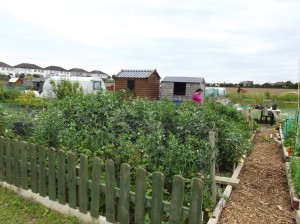 But three months later it looked like this. Okay, I’m boasting.

Forgive me.The point is that if we hadn’t gone at it full bore we’d still be battling the stuff now. By contrast, we’ve seen others in a similar situation meticulously clear a small bed in the middle of such a wilderness, plant in it, and then find to their dismay that the weeds have come straight back in and that they are pretty much right back where they started.  So they clear it again, and again, and again, and then give up.

Cleaning that allotment was the first and hardest thing we ever did but boy, aren’t we glad now.  While there may be the odd spear of couch grass that still creeps in even now it is easily and quickly dealt with and we can relax.

Sitting here and writing this, a thought has just occurred.  We both like to think that with our allotment we are working with, not against, nature.  Yes, I think it is so.  And yet at this point we were battling against nature: nature wanted the weeds there; we didn’t.

But I can say that we’ve never used, nor will ever use herbicides.  It’s all down to the fork and the hoe.  I’m both mystified and saddened when I see allotment holders use weedkillers.  Why?  What’s the point of having an allotment at all?  Beats me.

Happily the remaining two factors, soil structure and nutrition, can both fall firmly into the ‘working with’ category.

When we first dug and weeded our patch we thought the soil looked pretty good, a quick application of compost and it would be good to go.  In fact it was, as per photo above; but we now know it could have been so much better.

To start off with the clods we dug were hard and heavy, requiring a good few smacks with the back of the fork to break them up, but as we’ve progressively added more organic matter -anything we can get our hands on, cow and horse manure, compost, seaweed – things have improved.  Now the soil is so much lighter and actually crumbles off the fork of its own accord, so even digging is so much easier.  And if I can get a fork through it with ease then I’m sure the plants can now do the same with their roots.  Not only that but it drains quicker in winter and retains moisture longer in summer. 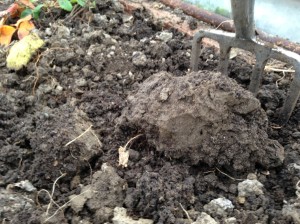 We still occasionally come across an untouched lump in an odd corner of a bed; the sight of it reminds us of the difference between now and then.  Today I nipped up with my trusty iphone and after a bit of exploratory digging, recorded the masterpiece here.

Apologies for the poor quality, but hopefully it shows a hard grey lump dug out of softer, darker soil.  It too took several smacks to break it up.

Back in our early days we heard that carrots require deep, fine soil in order to do well (they do), so Marion set to work preparing a patch.  It was an area of about one and a half square metres at the end of a bed.  Determined to do the job properly, she dug down 18 inches and put everything through a fine sieve.  It took her all day but the resultant tilth looked impressive, talcum powder came to mind.  We threw in the seeds and stood well back, ready for the imminent explosion of growth.

In fact very little grew, and what did was woefully scrawny.  When we came to pull up what little was there and dig the bed we found that it had set like concrete.  By contrast, and coincidence, that same bed again contains carrots as I write.  This time they did explode into a mass of verdant green.  The difference?  Organic matter.

So that’s my view: with an allotment the more you can put in at the beginning the easier it becomes eventually, and the greater the rewards.  To anyone contemplating starting: be warned.  To anyone about to give up: don’t.

If you’ve to any extent enjoyed reading this, I thank you and invite you to pitch in with a comment below; as said at the start, it would be great to get a discussion going.  If, however, you’re thoroughly bored and feel you’ve been robbed of ten minutes of your life, there are some very good videos on Youtube.

← World Café, have your say.
Time is running out to stop global warming – so we’re taking the Irish government to court…. →