Posted on January 16, 2019 By sustainableskerries

January is perhaps the month when growth is slowest in the allotment, and it may seem like there is nothing to be done.  This is not true: there is always something to get on with. Even now the buds on fruit trees and bushes are swelling in readiness for Spring and the wise gardener will be making his or her preparations also.

If you haven’t already done so, now is the time to think about constructing compost bins. 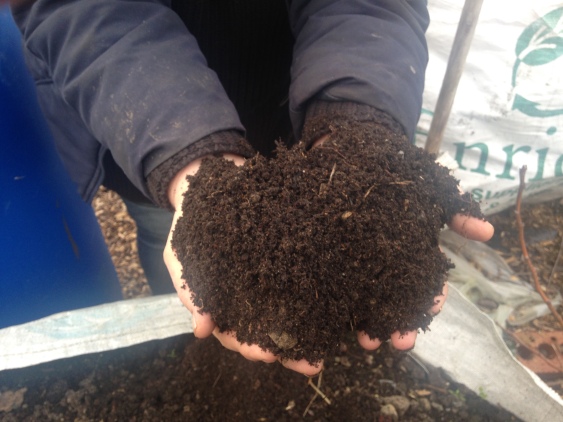 Homemade compost is both natural and free from contaminants (insofar as that is possible in this day and age) and I cannot recommend it highly enough.  One assumes that anyone who has taken an allotment has done so because they want natural healthy produce, and this is the way to go.  If on the other hand you are the sort who doesn’t mind spray and insecticide residues in their food you don’t have to bother with any of this, such produce is readily available in any supermarket for considerably less time and trouble.

Even farmyard manure can be problematical; herbicides and similar can pass straight through the animals in question and be imported into your patch.  One might assume that the quantities would be so small as to be not worth worrying about, as I always did, but last Spring we suffered a severe setback when we applied a batch of cow manure which killed almost everything it touched including potatoes, tomatoes, peas and beans.

We can’t prove it, I wish we’d sent a sample away at the time for analysis, but subsequent internet research showed that the symptoms were typical of  aminopyralid sprays, a widely used broadleaf herbicide used in agriculture.  Apparently it has been a recurring problem for allotment holders in the UK for the past decade or so.

This had never happened to us before and might never happen again, but we’re not prepared to take the chance.  From now on it’s homemade or nothing.

Gathering together enough materials can be a problem for many organic gardeners, but here in Skerries we are lucky.  For one thing the sea is only a few rooftops away and seaweed abounds, particularly after a gale of easterly wind.  And it’s free!

Seaweed is not a complete fertilizer in itself.  For reasons I don’t fully understand it is, apparently, low in both carbon and nitrogen.  But it is high in phosphorous and trace minerals and makes a fine tonic for the soil.  We don’t so much compost it as spread it as a mulch in the Autumn, this both feeds the soil for next Spring and suppresses the weeds.

A bed mulched with seaweed ready for spring.

We are also lucky because many of our neighbours don’t bother composting at all.  They are actively encouraged to throw their green waste into my bins rather than the heap in the carpark.  In this way we get more than enough for our needs; (perhaps I am shooting myself in the foot by writing this and encouraging them to use it themselves.

A compost bin does not need to be an elaborate affair; four pallets nailed together will do the trick, but if you have one you really need two.  This is because once the first is full you need a second to carry on filling while the first breaks down.  Small allotment?  No problem.  Smaller bins.

We have a fairly big allotment and we have three bins, and there is a gate on each.  This means I can get in, fork all the contents out, and then throw it all back in giving it a good mix in so doing.

Compost will break down on its own eventually, but turning speeds the process considerably.  There are those who claim they can achieve a twelve week turnaround, fair play to them, six months does me.

So what goes in, and how?

In my case all green matter.  I don’t worry unduly about weed seeds or roots because the heating process kills both.  With the correct balance of materials and an occasional turning (maybe once a month) the bacteria can heat the pile to 60 degrees C, more than enough to do so.

It’s a very good idea to smash, chop or otherwise break up large woody lumps like cabbage stalks.  They are incredibly tough and slow to break down left to their own accord.  In fact if you don’t administer justice at this stage they’ll still be there, pretty much intact, when the compost is ready; in which case throw them back into the next batch that you have coming along.

Brown material is also needed. ‘Brown’ means stuff like woody stalks, shredded cardboard or, in my case, woodchip (as conveniently delivered to the allotments by various tree surgeon type companies).  Green material is high in nitrogen; brown in carbon.  The bacteria need both in order to thrive and do the job.  Get the balance right, mix well, and you’re off to a flying start.

It’s impossible to have too much oxygen, my bins have slatted sides to facilitate aeration and regular turning does the rest.  Water is slightly different; in this case you can have too much of a good thing, and if the pile is wet you’ll end up with a soggy, stinky mess.  A good guide is to take a handful and squeeze as hard as you can, if you manage to squeeze out one or two drops you’re good.  Even if you can’t, but feel you nearly managed it, you’re still good.

Moist is the thing to aim for.  Bins should be covered to prevent them drying out in summer or getting waterlogged in winter.  If the pile seems a little dry when you’re turning it, get the watering can out.

You now have a pile full of worms, woodlice, fungi and creepy crawlies all munching away and turning your garden waste into the best possible fertilizer for your fruit and veg.  While I have absolutely nothing against companies such as Enrich who supply tonne bags, you have also done your bit by cutting down on plastic use (the bags) and polluting road transport.

If you have money in your pocket that you don’t want by all means spend it, but it’s not necessary.  There are plenty enough bacteria occurring naturally to get things going, and if you really want to be sure, throw in some seaweed.

← Time is running out to stop global warming – so we’re taking the Irish government to court….
Look after them and they’ll look after us! →