Posted on May 27, 2019 By sustainableskerries 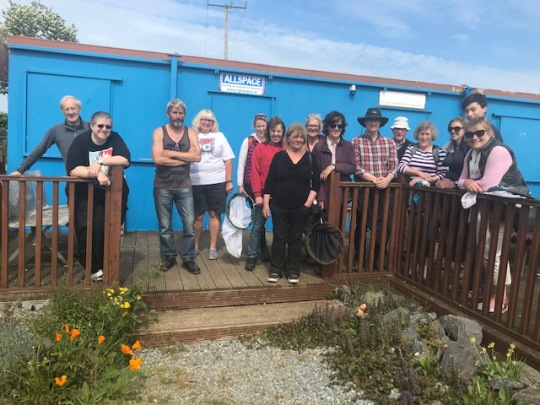 Sustainable Skerries recently hosted a Bumblebee workshop, an event that was hugely enjoyed by all who attended.

The event consisted of a two hour talk in the Community Centre (with, of course, the statuary break for tea and biscuits) followed by a stroll up to and around the allotments for a spot of practical field work and bee identification.

Our speaker was Dr Tomás Murray from the National Biodiversity Database, and Tomás exceeded all our expectations.

The man is clearly very well informed and passionate about his subject, in fact his infectious enthusiasm was, well, infectious.  We were expecting an interesting talk; instead we got a fascinating one full of interesting snippets.

We all know, for instance, that bees have barbed stings; well in fact they mostly don’t, bumblebees don’t and nor do any other bees except honey bees.  And there’s a very good reason.

Bumblebees are the best pollinators of strawberries, far better than honeybees – although honeybees are better at apples – and there is a reason for that too.

Ireland used to have 20 species of bumblebee; as of last year – and rather bucking the trend of biodiversity loss – we have 21.  There is a story to be told, and it’s local to the Dublin region.

If you weren’t there on the day and would like to know the answers to these questions please send an SAE and a postal order for €5.00 to Charlie Heasman at…

It’s not all good news for bees of course and we were expecting to be told this.

Bumblebees have been monitored here since 2012, making Ireland the first country in the world to do so – others have followed.  Since 2012 a 17% decline in population has been measured, with some species faring better or worse than others.  How much of a decline there has been in, say, the last 50 or 100 years, nobody knows because no-one counted them back then.  We can only assume it has been huge.

All this monitoring and recording takes time and money, and the Biodiversity Database is on a budget.  Tomás stressed that they could not have have got anywhere without the help of the public; ‘citizen scientists’ such as you and I.  Anyone can sign up to the Pollinator Monitoring Scheme and play an important part.  Here’s the link:

It’s actually quite fun if you have an hour or so to spare each week.

Having had our lecture, consumed our tea and biscuits and eaten a packed lunch, it was time to progress to the allotments.  Here, armed with nets – one for everyone in the audience, but you had to give them back at the end of the day – we were shown how to catch a bee, transfer it to a glass phial, and have a good look at it before letting it go again.  All without harming the bee or getting stung ourselves. 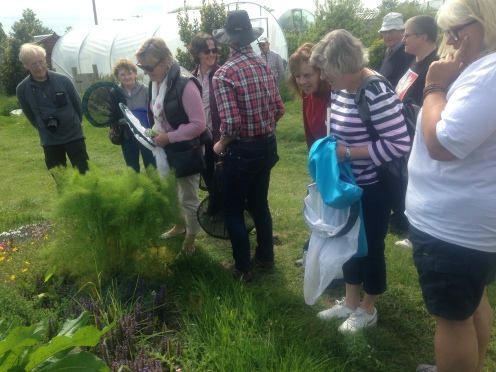 We were also fortunate that the afternoon was warm and dry, which met with the approval of both the bee spotters and the bees themselves.  There were plenty to be seen.

Most of them (Bombus locorum aggregate to the initiated) were to be seen on Polly Farrell’s phacelia.  No, that’s not a rude word; it’s a type of flower.  Here’s a picture:

It seemed quite selfish of Polly to hog so many bees for herself, but fortunately there were more than enough to go round.

Our mentor poked around in the foliage, catching bees, sometimes holding them, and identified the different species.  He explained which were the most useful flowers for pollinators, which were useless, and why.  We were told the best place to site a beehive, what to do to provide wild nesting habitat and the importance of mice.  Altogether an excellent day.

He had her by the back leg, so she couldn’t escape. Also,apparently, she was trying to sting but couldn’t penetrate the skin.

But perhaps the most important aspect of all this is the value of urban and suburban environments.  It is difficult to pinpoint any one reason for the drastic decline of pollinators (indeed, there is no one single cause) but pesticides, herbicides and agricultural mono-culture must all play a part.  Gardens, allotments and public spaces play a vital role in maintaining safe habitat, and the safer and more accommodating we can make it the better it will be for all of us.  In fact there are many ways we can all help at no cost to ourselves and with every chance of reaping the rewards.

Wouldn’t it be great if the town of Skerries as a whole were to get involved?

Here’s another link worth clicking on:

And before ending, I know there is zero chance of anyone sending me a €5 postal order, so here are the answers:

Honey bees have a barbed sting because they frequently have to fight off large mammals; all other bees do not.  The biggest threat to a bumblebee is likely to be another insect its own size or smaller; a single barbless sting will do the job.  Honeybees have to fight off much larger predators which are after their honey: bears, honey badgers and us for example.  A quick single sting will not do the trick so they have developed a barb.  The sting stays, is ripped out of the bee and the unfortunate bee dies, but not in vain.  A bit more of the bee detaches with the sting and, pulsating away, keeps pumping in venom. Not only that, but it secretes a pheromone that alerts and attracts other bees in the swarm, encouraging them to attack also.  Eventually even the most determined bear will be driven away; or so the bees hope.

Bumblebees are best at pollinating strawberries because strawberries are compound fruits; have a look at one sometime.  It’s a multi-faceted affair with a pip on each bit.  To get a perfectly shaped strawberry it is necessary for all the fruitlets to be pollinated; anything less and you get a lopsided fruit, which is what happens if the pollinator is not a bumblebee.  But bumblebees have developed a unique method of pollen gathering which they use on strawberries called ‘buzz pollination’.  They hover over the flower and vibrate their wings at a frequency that blows the pollen into a cloud.  Some of it lands on them, their plan all along, and some of the rest settles over the centre of the flower, ensuring even pollination.

So there you have it: no bumblebees, no more perfectly shaped strawberries.  It’ll be the least of your worries anyway.

It is known as the Tree Bumblebee (because it nests in trees and feeds on tree flowers – sometimes nomenclature does make sense!) and is common in Europe.  In 2001 it crossed the Channel into Southern England and has spread out at the rate of 50 km a year ever since.  It was expected all along that it would eventually reach Ireland and last year it did, it was first seen by an amateur bee spotter during his lunch break in Stephen’s Green.

Which just goes to show that an amateur really can make a contribution.

Fame scientific acclaim and a €5 postal order to the first person to spot one in Skerries.

← Does buying “Green” products save the planet after all?
Still waiting for Spring →