A Forest for Skerries?!

Posted on November 9, 2020 By Sabine McKenna 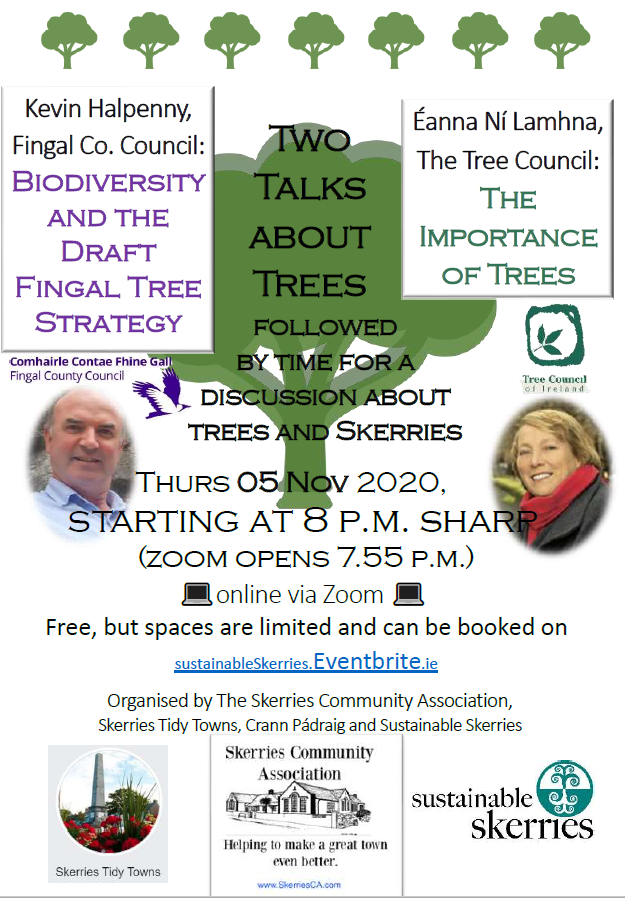 A Report on the Skerries Tree Event, November 2020

Close to 50 people zoomed in for “Two Tree Talks and a Discussion” last Thursday, organised by the Skerries Community Association, Sustainable Skerries, Skerries Tidy Towns and Crann Padraig. Most were Skerries residents, though we had visitors from as far afield as Wicklow and Malahide and Ballymun.

We had people from the organising organisations as well as individual tree lovers and a good few who are active in the Skerries Tree Preservation Group. And then there were our two speakers, of course!

The Importance of Trees

Éanna Ní Lamhna is not only a very well-known broadcaster, author, and nature lover – she is also the vice president (and former president) of the Irish Tree Council. Éanna spoke passionately and knowledgeably about the importance of trees not just for biodiversity, but also for carbon sequestration and for mental health. She stressed that while not all trees have the same value, all trees have some value!

Did you know that the typical oak tree supports 284 species of insects? And that the typical 10-year-old tree absorbs 22 kg of CO2 per year? Not to mention the power of good it does all of us to walk through a nice wooded landscape, or to look at mature trees on the sides of our roads.

Having said all that, the right tree in the right space is actually very important, too. Putting the seedling of a tall-growing tree species right below an overhead electricity line, for instance, is not a very good idea…

The Forest of Fingal

It seems that at the moment, Kevin Halpenny’s work is all about the trees! As the Senior Parks Superintendent with Fingal County Council, the review of the Tree Strategy for Fingal is currently a significant part of it. He gave us the background to the draft strategy, with the great name of “The Forest of Fingal,” which is currently available online. By the way, the submission period is rather long to allow everyone to consider the strategy in detail and then to have their say. A good idea, it would seem! Fingal have even created a video about the Forest of Fingal.

We could also not agree more with the vision Kevin outlined for the tree strategy – a strategy, he stressed, which is for Fingal, not for Fingal County Council!

And these will be achieved, hopefully, through a responsible, efficient and coherent approach to management; through tree protection and retention (for instance through bonds which builders have to guarantee in case they damage trees during their activities); through tree planting and establishment initiatives to ensure a sustainable tree population; and through community involvement, public engagement, and awareness.

The presentation went through a lot of interesting and relevant details, such as the proposed recruitment of a tree officer and tree management team to coordinate and implement the tree strategy. Another few proposed actions that resonated particularly with the audience were:

As mentioned above, we are in the consultation phase of the Forest of Fingal: A Tree Strategy for Fingal.

Trees have positive effects that we are sometimes not fully aware of, such as buffering storm water and thus making flooding less severe.

There was a lot more in the presentation. It would not be practical to add more here, and yet you can see it all for yourself:  We are grateful to Kevin for having made the entire presentation available to us. It is unfortunately too large to upload here, but we will email it to you on request to sustskerries@gmail.com

Treesaregood.org managed by the International Society of Arboriculture

Kevin mentioned that Fingal has only 6% tree cover, vs nationally 11% – which is again very low compared with the European average, which is somewhere around 38%.

Increasing the coverage by just one per cent would mean planting 1,000 acres with woodland!

There is a connection between green equity and equality, by the way, and Kevin stressed that social inclusion (green equity) is one of the guiding principles of the draft strategy.

The forest of Skerries…?

As residents in a coastal town which has many mature and also many very young trees lining our various streets, but also many open green spaces with less trees than you would think, we were very interested in what both Éanna and Kevin had to say. After the two presentations, there was time for the participants to respond, first in small groups and then in the closing plenary session.

The overall response to the draft tree strategy was very positive, especially as far as its emphasis on community involvement is concerned – something that in the past seems to have been haphazard or even missing. In that context, reaching people who are not typically involved would be very important (inclusion). The Skerries Community Association is in the process of establishing a network for all neighbourhood and residents’ groups, which could become very useful in this context!

Many also mentioned the need for concrete targets for increasing the tree cover in Fingal.

It was noted that as yet, there is no wooded area in the town of Skerries – it might be worth identifying where a woodland could be planted, complete with walkways, cycle routes, seats and other features, maybe even an outdoor classroom…

Some mentioned the fields around the Mills as possible areas that could be planted; others mentioned that some open spaces in the many estates would offer themselves, while taking into consideration the fact that some people do not like trees by their houses, that some areas are used by children to play, and that trees might impact on the view from people’s homes, especially those lovely sea views some have… Even taking all this into consideration there is quite an amount of space available on all of the green spaces in the town.

Also, replacing trees which were taken out in estates, who were planted and didn’t survive / were vandalised over the past number of years with more suitable trees is something residents are looking for.

The potential of trees for flood alleviation found a lot of interest, as well as the idea of having a comprehensive map of all the trees in our town. Perhaps local people, or even the secondary school, could be involved in recording the existing trees?! It’d be great if there was some way for people to get info on all individual trees on their phones, maybe via a QR code!

People called for an emphasis on native species, and hedgerows were mentioned a few times as well – if possible, they ought to be included in the tree strategy, it was said.

Could fruit and nut trees be included in the palette of trees for future planting? Kevin said that they would indeed be part of the new strategy. In residential open spaces they can do quite well; in streets, ornamental pear trees or crab apples can cause problems with slipping. However, fruit and nut trees should be increased in general – they are also good for pollinators. And he added that Fingal bye laws now allow for foraging in parks and open spaces!

Another question put to Kevin was whether there are trees which would thrive in coastal locations and which could help secure the sand dunes. Indeed, there are: In France, along the Atlantic coast, for instance, the Black Pine (Pinus nigra) is used to stabilise the dunes – an issue especially for Rush, but also for Skerries as there are only few trees close to our coast.

As for community involvement, Kevin mentioned that Fingal Co Council would be positively disposed towards a tree stewardship program as they happen elsewhere (someone mentioned New York City) – this would also be positive with regards to social inclusion / cohesion. He praised the great involvement by many of the community in Skerries, some as individuals, others as parts of the Skerries Tree Preservation Group, Sustainable Skerries, Skerries Tidy Towns and the Skerries Community Association, who all had volunteers out watering trees during the drought, which certainly saved many of them.

More tree events for Skerries would certainly be welcome – online as needed, in real life as possible, and possibly a mini forest community planting event!

On behalf of the organisers, Michael McKenna, chair of the Skerries Community Association, ended the event thanking the two main speakers and all attendees for their time and participation.  He added: “We are very interested in getting a really inclusive input into the Fingal Tree Strategy. Tonight was a great start in this process.”

Now have your say in the Tree Strategy!

You can see the draft Tree Strategy, and a few first submissions, online here: https://consult.fingal.ie/en/consultation/forest-fingal-tree-strategy-fingal

First preparations have already taken place for a possible follow-up event closer to the end of the consultation process (i.e. early 2021) … keep your eyes peeled! If you want to be kept in the loop, we encourage you to subscribe to the Sustainable Skerries email newsletter, where we will certainly send out any further information.