The other side of “being green” in Skerries allotments

Posted on April 22, 2019 By sustainableskerries 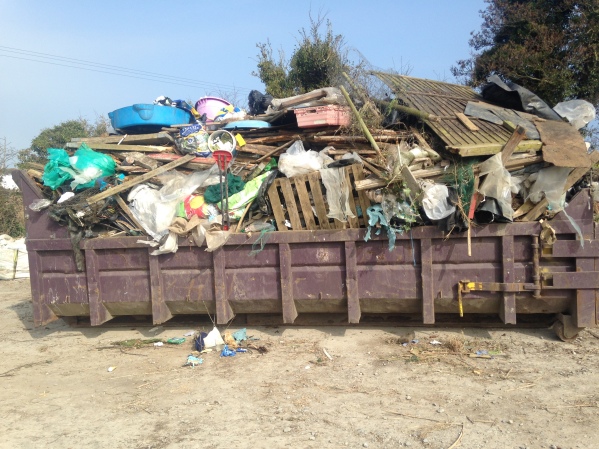 I normally enjoy writing about the allotments and all that goes on through the year, and why not?  After all, we’re all up there growing healthy vegetables, communing with nature and doing our best to help the environment, so what’s not to like?

That first photo was taken on the 31st of March.

Fingal CC provide one of these skips twice a year, once in Spring;once in Autumn.  Up until now this has been sufficient, albeit barely.  But this year’s early skip was nowhere near up to the sheer volume of rubbish accumulated.

Photos 2 and 3 were taken a couple of days ago, and you’d never know that a skip had been filled and taken away barely three weeks since.

Actually, the skip didn’t get taken at all to start off with.  In an effort to get rid of as much waste as possible the volunteers overfilled it to a ridiculous extent.  Ever seen “Level load only” stencilled on the side of a skip?  As such that must be the most optimistic and ineffectual signage of all time, but this was taking it to the extreme.

This still didn’t stop latecomers turning up with even more rubbish, their only problem was trying to work out how to possibly get it up there.  Still they tried, and if it slipped off and onto the ground, so what?  They could at least walk away knowing that they’d done their bit.

So when the Fingal driver turned up to collect the next day he took one look, turned around and drove straight back out the gate.

There was nothing else he could have done.  If he’d have hitched up to that he’d have been pulled by the guards before he got a mile down the road.

So the next day the same volunteers had to take half the load off again and throw it to the ground.  The skip was taken.

That rubbish is still on the ground and is being added to daily.  We are back to pictures 2 and 3.

So what’s going on?  Where’s all this waste coming from all of a sudden?

I think I know the answer.

The allotments are nine years old.  They support an increasing number of polytunnels.  Polytunnel plastic has an average life expectancy of 10 years.  Up until now very few have needed replacing; now an ever increasing number each year must be recovered.  Recovering a polytunnel creates an awful amount of plastic waste.  Trust me, I know.

Look again at the photos.  How much of that is polytunnel plastic?

When a polytunnel cover is replaced it is not only the old plastic that has to be thrown out, there are a lot of offcuts from the new cover also and a large amount of waste to be disposed of..  This cannot be avoided.  What can be avoided is throwing out all the bulky doorframes still wrapped in said plastic; these should be stripped and segregated.  We’ll come back to that.

Don’t get me wrong.  I’m not against polytunnels; I have one myself.  I re-covered ours 18 months ago so it should be good, and I should be safe, for another eight years or so; but, yes, it produced a lot of waste at the time.  What I’m getting round to saying is that we have to rethink our attitudes to waste and start acting responsibly.

By now some of you have taken offence.

Good, you’re my kind of people.  You’re offended because you do care, you do try, and I’m lumping you in with the idiots (there is no other word) who don’t.  When I say “we” I mean the collective “we”, the collective “we” who are responsible for the godammed awful mess in the bottom car park.

The allotment committee have always dictated that only green waste be allowed to be left there.  They have steadfastly refused to segregate an area for non-green waste because they’re afraid that this would encourage some to bring rubbish from home.

They have a point.

Look again at photo 3.  What clown threw a plastic commode onto the pile?  I hope you’re reading this, whoever you are.  Ditto the person who disposed of their kid’s blue plastic paddling pool perched on top of the skip in photo 1.

(Actually, the thought occurs that I’ve just found a replacement word for “idiot”; in truth I’ve plenty more but unfortunately cannot print any of them here).

I feel strongly that if nothing else wood should be segregated.  My best estimate is that 40% by volume of that skip was wood.  Waste wood has a value; or at least a small value that can partially defray the cost of getting rid of it.  Some thrifty types pick through the pile for bits and pieces that they can reuse; one or two others take the best of the rest home for firewood.

And couldn’t we use it for the annual pig roast instead of importing yet more waste wood in the form of pallets.  All the while it is laced through the rest of the crap in the heap the answer is no.  But if it were put to one side?

Of course, allotment holders would have to comply and act sensibly.  A heap of old fence wire with a stake on the end of it does not constitute wood waste any more than aforementioned polytunnel doors covered in plastic do.  But if one can make the effort to assemble such things in the first place surely one can take the trouble to disassemble them when finished with?

The committee have also always said that everyone should take all their non green waste home with them.  I’m sorry, but I think this is a totally unrealistic expectation and is never going to happen.

How many people are going to bundle swathes of muddy old polytunnel plastic into their cars?  Ditto old fencing, rotting scaffold boards and wooden shed panels.  I’ll tell you the answer: as near to none as makes no difference.

Even if we segregate properly, and we should, we will need more than two skips a year.  The problem is that they cost money, and quite a bit of it.  Apparently a skip of the size in question is something in the order of €800 to €900.  Fingal won’t keep throwing us more skips just because we ask for them and the association simply doesn’t have the money.

Any income to the association is already allocated to grass cutting and maintaining the water supply etc.  there is nothing to spare.  But if the (paltry) annual membership fee of €10 was doubled to €20 an extra €1,900 would be generated.  And guess what?  It could pay for two more skips a year.

I’d be more than happy to fork out the extra cost of two pints of porter or three cappuccinos.  Would you?

Whatever the whatevers of it all, the present situation cannot continue, I think we are all agreed on that.  the electrification of the gate to restrict unwanted access will help.  There are various ideas being bandied about by the committee and it would be premature of me to talk about them here and now.  But in the meantime we can all do our bit.

Firstly, the idiot who dumped this green waste on top of the (admittedly only semi segregated) plastic and wood waste should be shot, as should the people who don’t bother picking the plastic, bits of string etc out of their green waste.

I recently constructed a raised bed and filled it with soil/compost from the car park.  It was surprisingly nice looking stuff and I bet it makes an excellent growing medium without the need of anything else, but…

…every spadeful contained string, plastic, plant labels, you name it, which had to be picked out.  Plastics and microplastics are invading every part of our lives, food supply and environment.  Here at Skerries allotments we seem to be doing our level best to make matters worse. 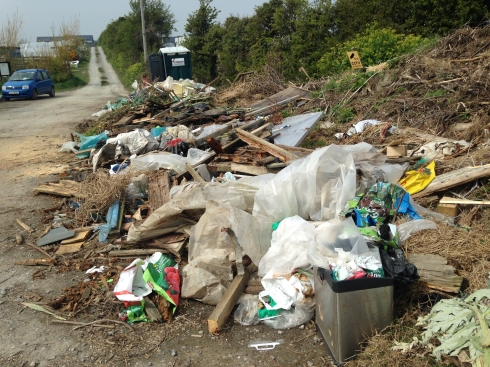 ← Happy gardening everyone!
Why not take a look in our Media Page? →