Posted on September 24, 2020 By sustainableskerries

Back in March we decided to buy some wildflower seeds.  Coronavirus was just beginning to establish a grip on all our lives and the news abounded with stories of shoppers clearing out supermarket shelves of bread and loo roll.  I joked that I’d better get online quick and do some panic buying of my own…

We wanted Irish grown native seed and there wasn’t a packet to be had anywhere.

While it was great to see that a whole lot of other people were now taking an interest in the natural world around them, a welcome trend that has continued and intensified, it left us a bit stuck.  In the end we bought a few boxes of supermarket wildflower mix.

So what’s wrong with that?

Well, it’s better than nothing but there are in fact a few problems.  The first is that there is a risk, albeit a very slim one, of importing disease.  It may seem finicky but in fact this sort of thing happens all too frequently.  To cite an example, ash dieback threatens every ash tree in the country and came in on infected plants imported from the continent a few years ago.  It is likely that in the not too distant future the ash will have disappeared from the Irish landscape.  Remember Dutch elm disease?

Secondly, wildflower mixes often contain species that are not particularly useful to pollinators.  Fine if all you want is colour; not so if you’re trying to promote bee habitat.

The third reason is perhaps the most important: genetic purity.

Plants and animals are continually evolving.  Different populations might diverge over time as they respond to localised conditions.  This can happen on a continental, national or regional scale and Ireland is no exception; in fact given that Ireland is an island, probably even more so.  Local species adapt to best thrive in the particular environment they find themselves in and introducing non-native genes can weaken their advantage.  Ecologists worry about this a lot.

But the blindingly obvious reason for collecting your own seeds that I’ve only just remembered to include is that they’re free.  One could also say that they incur no road miles or fuel to deliver, involve no packaging waste, and obviate the need to wait in all day for a delivery driver to eventually turn up at just as it’s getting dark.

So we decided to collect our own seeds this year.

Not true: Marion decided to collect our own seeds this year.

So what are we going to do with them exactly?

As members of Sustainable Skerries we hope to play our part in establishing two wildflower meadows in the town this Autumn.  Establishing such meadows tends to be a longer term project than one might think; ten years to maturity is a figure often quoted, and we simply don’t have the patience.  Nature must be hurried along.

The generally accepted method is to select an area of grassland and leave it unmown all year.  Then in late Summer mow it tight, leave for a few days for the seeds to drop, then remove the cuttings.  Wild flowers find it very difficult to compete with the much more vigorous grass, but by doing this year on year the fertility of the soil is gradually reduced, which checks grass growth and allows the flowers to push through.

Where do the flowers come from?  The soil contains a natural seedbank which multiplies and strengthens every year.

All very well if you have ten years to spare; we would prefer to do it, at least partially, in one.  But how?

The mowing and removing goes ahead as standard; we simply accelerate the process by bolstering the seedbank right at the start with the seeds we’ve collected.  We want to have something for the people of Skerries to look at next Summer.  Oh, and we have a secret biological weapon; more about that later.

We’ve spent this Spring and Summer observing what the bees are feeding on and when; different flowers come into season at different times and different bees have different preferences.  This has advised our selection of seeds, we also want not only pollen and nectar for the bees but colour for the public.  Fortunately this can be done.

With that in mind, Marion has collected Red Poppies, three different types of Vetch, Yellow Rattle, Knapweed, Musk Mallow, Love in the Mist, Campion and Marigolds.  This should give a good splash of colour and provide both pollen and nectar through the summer.

Some are easier to collect than others, catch Yellow Rattle at the right time and the seeds just fall from the pods.  Vetches are trickier, their seeds are like tiny little peas in tiny little pea pods, which is hardly surprising as they are all the same family.  Anyone who has ever complained about the tedium of shelling peas really ought to try Vetch.

The secret is to use a bag, a plastic bag.  And not just any plastic bag but the sort that freshly baked supermarket bread comes in.  It has tiny little perforations to prevent the bread from sweating and those same perforations allow the pods to breath as they dry out.  In nature as the pods dry they tighten and explode, scattering the seeds far and wide; in the bag the pods explode and the seeds fall to the bottom.  Simple.

So what’s this ‘secret weapon’ previously alluded to?

It’s certainly not the plastic bags, useful though they are; it is in fact Yellow Rattle, a rather unprepossessing little plant that most people probably won’t be aware of. 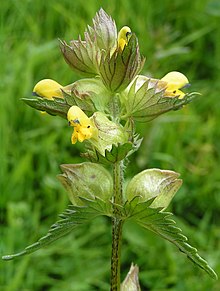 And why should they be?  It looks a little like a nettle, only grows to about 12 inches tall and there’s nothing in the least bit astounding about its small yellow flowers; but it has one significant habit: it parasitises grasses.  That is to say that its roots tap into grass roots and draw out both moisture and nutrients, which of course, suppresses them.  With the grass weakened the wildflowers can push through.  It is reckoned that Rattle can reduce grass coverage by up to 60%.

Our Rattle seed came from the Ballast Pit btw; you can’t get much more ‘local provenance’ than that.

From further afield and a only a couple of weeks ago comes Devil’s Bit Scabious, a rather ugly name that the flower really does not deserve

This is an old medicinal plant which was used to treat skin rashes and the like, Scabere is Latin for scratch.  The Devil’s Bit part is on account of the root.  Pull one up and the tap root is truncated, bitten off by the Devil in a fit of rage against its healing properties according to folklore.

We found it in the Botanical Gardens at Kilmacurrach in South Wicklow.

This was in a wildflower meadow, the field was covered in it, and it in turn was alive with bees. This was all the more surprising as we were in the first week of September, a time when most flowers had finished flowering and the bees died off. Clearly this would make a useful late season addition to our mix.

So Marion filched some.

She shouldn’t have done really as it was against the rules. Obviously the Gardens can’t have the public roaming around all over the place pinching plants and seeds so an edict is in place. But we had just been told by the staff that the meadow was to be mowed next week and the cuttings taken away, so she had no compunctions about doing so. A sample of seeds made its way back to Skerries.

Now we have our seeds all we need to do is sow them. Work is about to start on our first meadow here; watch this space.